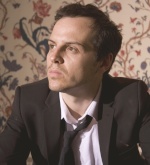 "Of course he was all over you." Jim laughed. "He was ordered too, to see your reaction." He didn't care John knew this. What did it matter anyway, Jim was completely in control. He had tested the faithfulness of many of his workers, it sort of was routine. Not on sexual behaviour though, this was the first time Jim had ever gone so far. But he loved it.

"You're a weak man, John. I expected so much more." Jim's voice dipped low, as if he sound sad. As if he were hurt by what John had done while he'd hoped John would have done this in the first place.

Jim could no longer hold back. He needed the relief perhaps as bad as John did. So when his sniper once more pleaded, begged, Jim pulled back both his hands. Eagerly he undid his trousers, though he didn't pulled them down completely.

Once more he squeezed the lube, coating himself up after he' attached the condom. He had considered doing John without, but god knows where this one had been...

Jim lined himself up and without warning pushed in. A loud groan echoed through his office. One hand moved to John's hips, the other to his lower back to keep him pushed down. "God.. How can you still be so... tight." Jim moaned, entering more and more.
John Watson MD

"Wh-what?" he exclaimed, his mind was gasping to understand the meaning of Jim's words, but eventually he realized his boss had paid someone to try to sleep with him. "I can't-" he groaned, unable to even try to reply, the anger in his chest only igniting his lust further.

And when Jim's hands moved away, he knew what was to come and rational thought could not enter his brain at all.
"Jesus Christ!" he exclaimed as Jim pushed deep into him, no warning, even though he had been prepared thoroughly.

John didn't receive that often and his muscles stretched considerably to accommodate Jim, it felt like he was filling him completely. He was panting desperately on the desk, his face pushed onto some sort of contracts that had been lying there, but he couldn't care less, it felt so bloody good.
James Moriarty

As Jim got all the way in, he moaned. He gave them both a few seconds to adapt to this feeling before he started moving again. John was surrounding him completely and the warmth and tightness of this was almost too much. Almost...

Jim had began thrusting now, filling John again and again and again, until he found a reasonable pace both of them, well, Jim most likely, enjoyed.
His hand gripped at John's hips, making him move backwards as Jim thrusted back in.
The arousing sound of their skin slapping together filled his office, mixed with both of their moans every now and then.

Jim's skin was covered in drops of sweat and one hand moved to undo his tie and shirt buttons a little. "Oh, John. This is so good." He groaned, increasing his speed once more.
John Watson MD

John lost control of himself and his reactions, he was all moans and whimpers, his hands balled into fists as he pushed his ass back to meet Jim's thrusts.
"God, yes, like that," he was saying, his arousal rubbing painfully on the desk, but it only added to the forbidden pleasure they were sharing.

"Jim, please, so, close," he muttered, his hands were straining against the tie, he wanted to be able to touch himself, frustration rising to levels he had no idea he could get to.
James Moriarty

John wasn't the only one losing control, Jim was pounding into him like a wild animal. Knowing this wouldn't go on much longer, he decided to give John his please as well. With a smooth movement he positioned him in a way he could reach between his sniper's legs.

His hands gripped around the already leaking erection and began to pump it. "I hope you.. realize.. Just..how lucky..you are.. Watson.." He groaned, thrusting in and pumping at the same time.
Sponsored content