I was playing Jim in this one. It was really cool...although I got the impression Sherlock was just playing me, just trying to trick me into thinking he was evil...hard to say really...

You're now chatting with a random stranger. Say hi!


Stranger: You said before... it could be
interesting if we were to work together. -SH


You: Yes, but I don't know if I could
trust you....especially after that stunt you pulled on the rooftop. - JM


Stranger: Why is that? You did the same
thing. -SH


You: Yes, but you didn't hold up your
end of the deal...you were supposed to die, remember? -JM


Stranger: No, I was supposed to fall. -SH


You: Oh you certainly did...fell in
more ways than one. How's your reputation these days? -JM


Stranger: You know how it is. Rather
unfortunate. It did make me realise a few things though. -SH


Stranger: They turned against me faster
than I thought they would. I'm a bit insulted. -SH


You: You should know by now, ordinary
people can be so fickle...I'm surprised little Johnny boy still sticks by you.
-JM


Stranger: You know as well as I do that I
haven't seen him since. -SH


You: Oh yes but he still upholds your
innocence, to anyone who will listen in fact...he's very loyal. It's sweet. -JM


Stranger: Interesting. This isn't really
about him though. Don't tell me you've changed your mind. -SH


You: I haven't. You and I could set
the world on fire Sherlock...two great minds like ours, working together...just
think of all the fun we could have. -JM


Stranger: It's hard to explain, but that
makes more sense now. I'm not sure why it didn't before. -SH


You: We're the same Sherlock...you'd
never have to get bored ever again. -JM


Stranger: I'm interested, Jim. Things are
making much more sense since the fall. I should really thank you. -SH


You: I'm pleased you're starting to
see things my way....I still worry though...worry that you're too...nice. -JM


You: Yes...too good...on the side of
the angels. You wouldn't be willing to play the same games as me. You wouldn't
have the nerve. -JM


Stranger: I disagree. Everything seems
different now. I want this. -SH


You: And what about John? What would
he think? -JM


Stranger: I didn't even think of him. I
think I'm starting to care less. I'm just tired of being bored. -SH


You: Well in that case dear
Sherlock...let's start having fun. Where shall we start? -JM


You: St Barts? Or would it bring back
too many bad memories? -JM


Stranger: Not exactly the place I'd go to
when I want tea, but there is a nice cafe across the street from Barts. Is that
fine? -SH


You: OK. Will you be in disguise or
in all your usual glory? -JM


You: Good idea. Nobody knows you're
alive yet...and we should wait for an opportune moment to let them all find
out. -JM


Stranger: I'm not far from the cafe. I can
be there in about five minutes. -SH


Stranger: What about you? Doesn't everyone
think you're dead as well? -SH


You: There were no reports of my
death in the papers, unlike yours. I'm just a poor actor exploited by the evil
Sherlock Holmes. -JM


Stranger: Then I guess I'll know who to
look for, /Richard/. -SH


You: Yes, I'm here now. I took the
liberty of ordering you a cup of tea. -JM


Stranger: *walks into the cafe, spotting
Jim he sits down at the table.* How thoughtful.


You: I didn't know if you took sugar.


Stranger: Yes, I do. *prepares his tea
before taking a sip*


You: You're looking well. For a dead
guy.


Stranger: Thank you. I thought the ginger
look was a bit much at first, but it's grown on me.


Stranger: Oh? Have something in mind?


You: Well...I had a few ideas...about
your so called "friends" in the police force.


You: Those friends who could so
easily have you arrested, so easily disbelieve you, so easily mark you down as
a fake.


Stranger: You don't know the half of it.


You: God I wish someone would teach
her a lesson....and that half wit she hangs around with.


Stranger: Oh, *smirks* they do more than
'hang out.' And they think they're being secretive.


You: No one can be secretive around
you Sherlock...you're too clever for that.


Stranger: So, do you have a plan or are we
playing this by ear?


You: Well...we should start with
those two. They're our targets.


You: Now you're talking...it's going
to be lots of fun, and there's so many options.


You: There's kidnapping of
course...I'm good at them.


You: But really Sherlock...you musn't
let me steal all the limelight...not again...not now we're...partners. I'll let
you have the final say.


Stranger: Well... Anderson does have a
wife. And she doesn't know anything about his little affair. If we were to take
her and Donovan... make him choose. Kill both, of course. But forcing him to
make that choice might break him. ....too cliche?


You: I know the perfect place to take
them, I have a lot of empty buildings on my books.


Stranger: I'll bet you do. Just like I bet
you knew how much I've always hated him.


You: Exactly....which is why I knew
this would be an ideal plan to ease you into my world...


You: We'll have to let people know of
course, there's no point having fun if no one can see you....


Stranger: What? Some sort of closed
circuit video feed?


Stranger: Route it into the police
station?


You: And to the media...they'll have
to beg for their lives...on camera.


Stranger: Fine by me.


You: Delightful. We'll have all of
London's best desperately trying to find us....oh wait hang on....we are
London's best.


Stranger: *smiles* Considering the topic
of conversation we're more like the worst.


You: *rubs hands* Oh Sherlock I've waited
all my life for a partner like you...finally an equal...someone who
understands....


Stranger: And you meant it? I'll never be
bored again?


You: There are SO many games we can
play...the fun can be endless, unimaginable possibilities....


Stranger: Then let's get started.


Stranger: How soon can everything be
prepared?


You: I'll make a few phone calls...I
can get us a location almost immediately...then we just need our unwilling
participants.


Stranger: That shouldn't be too difficult.
Broadcast it tonight then? Or tomorrow morning and make them wait a while?


You: Hmmm. Maybe keep them missing a
while first...get everyone worried and panicking.


You: Do you know Anderson's address?
I can arrange for his wife to be collected.


Stranger: Yes, I have it here. *slides
phone over*


You: *types it onto phone*.
Excellent...what time do Donovan and Anderson finish at the station?


Stranger: Anderson should be out early, he
usually ducks out around four...


Stranger: Donovan will be later, paperwork
and things of the sort. Six to seven, I'd say.


You: I'll have my men do the dirty
work...then I'll text you the address and meet you there later...sound OK?


Stranger: Sounds fine to me.


You: Are you having fun yet?


You: How about we have a camera set
up in the police station so we can laugh at them all trying to figure it out?


Stranger: That would be great. Make sure
there's audio. That's the best part.


You: It's been a delight to see you
again.


Stranger: Yes, this was good.


Stranger: I'll see you in a bit then?


You: *holds out hand to shake*


Stranger: Let's hope this goes different
than last time I shook your hand. *takes his hand*


You: *smiles*. I look forward to a
long partnership together Sherlock.


You: *stands up, brushes down suit
and leaves cafe*


Stranger: *finishes his tea before leaving
himself*
JimMoriarty 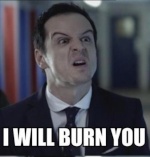 There are a lot of Dark!Sherlocks and Dark!Johns running around Omegle, it seems.
Current date/time is Thu Apr 02, 2020 8:19 am