((Based on this fic [Only admins are allowed to see this link] of my lovely friend, JHWatson))

Sherlock lay, as usual, face-up, hands folded under his chin on the couch. John would be home in approximately five minutes and a half, plenty of time to think his plans through. He had not met John this morning, John had been gone to work before Sherlock could approach him. He had been up all night, not a rare occurrence, but had been so lost in thought for an hour or two that he had only heard John leave. Then it was too late of course.

Yesterday, John had said that if he wanted to win someone's heart, he had to try courting. So Sherlock had spent the whole night and morning on how one would 'court' the other. He had filled his brain with contemporary files of 'wooing ladies', 'hitting on someone' and 'courting'. They were all different approaches to luring someone into dating/flattering someone, sparking physical attraction and the like. The rest of the day, Sherlock had thought of a plan, which he now was going to put into action.

Regarding on John's light footsteps on the stairs, he was in a giddy mood. Perfect. When John came in, Sherlock asked without giving John the opportunity to even greet him:

"John, would you like to go out for a drink?"
JHWatson 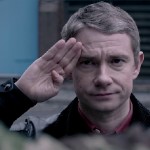 John set down the shopping bags with a loud *thump* and took his jacket off.

"I'm sorry, what did you say?" He asked, hanging his jacket over the back of the chair. Sherlock inhaled and exhaled deeply, trying to calm himself a bit and tried again.

"I said, would you like to go out for a drink?" He swung his hands loosely back and forth, betraying his giddiness. John eyed him for a moment, then he shrugged.

"Sure. Where'd you wanna go?"
The Consulting Detective

Sherlock got up from the couch to John's first reaction. He was giddy, but not aware of it. Yet, he still looked John in the eye, as usual.

"The Hobgoblin, just around the corner." Sherlock eagerly reached out to grab his coat. He had it all planned out and wished to test it out as soon as possible.

"Are you ready?" Sherlock asked, now actually being interesting in the answer.

((YES the hobgoblin is a real pub on the corner of Marylebone road. I just couldn't resist the innuendo to the Hobbit ;) ))
JHWatson

John raised his eyebrows at him.

"Right now? Okay, whatever you want..." he shrugged. He thought it'd take time to get used to Sherlocks behaviour, but it seemed that even time couldn't do the trick. "I do have to out away the groceries though. Is there any room in the fridge or have you stuffed it with experiments again?"
The Consulting Detective

Sherlock hadn't considered the possibility of going later, really. So now John introduced that, Sherlock wasn't sure what was 'polite'.

"Oh, ehm... Or would you like to go later?" He normally wasn't polite, but he was ready to make amends if they would improve the result of his plans.

"But, naturally." Sherlock responded on the notion of the experiments.

Sherlock swiftly grew bored of being polite, it didn't suit him. At. All. So while tapping his foot impatiently, he asked (after John had rummaged through the refrigerator):

"Ready yet?" And he went down the stairs, expecting John to follow him.
JHWatson

John shoved the last items in the fridge and ran after Sherlock. He stumbled down the stairs and followed the taller man outside. Only when the cold London wind swept in his face, did he realize he had forgotten his coat. There was no way that Sherlock would wait until he got it, so he just flapped his arms around his chest awkwardly and caught up with Sherlock's elegant stride. He felt his pockets and concluded that his wallet was in his jacket.

"Er, my wallet is still in my jacket, which you didn't let me get, so the drinks are on you. I'll pay you back later."

Even though he usually paid for the drinks, he still felt the need to pay Sherlock back. In a matter of minutes, they were at the pub.
The Consulting Detective

Just inside, Sherlock noticed that John wasn't wearing his coat. That was odd. He made a quick deduction and smiled. The doctor was really fond of him if he just followed him into the cold.

Sherlock waved shortly at the bartender, who pointed at a table with chairs in a cosy corner. Sherlock nodded in aknowledgement to the bartender and lead John on to the table. He draped his coat over the back of his chair and took his seat. He looked up at John who was pouting and frowning in his usual way of confusion. Obvious question coming up in 3, 2, 1-

"You reserved for us?"

"But of course. I had all day nothing to do, no case, no dull humans killing each other in a tiny brilliant way, so of course I did. Will you take a seat now?"
JHWatson

John sat down immediately before realizing he did everything precisely as he was told to do by Sherlock. Well, it worked for them.

"So... Is this for a case? A trick? Just you wanting to show off you brilliant deduction skills?"
Sponsored content