Yeah I was thinking they're like 16-ish, old enough for John to be onto the girls and to be allowed out of school at the weekend. Boarding schools are like private primary and secondary schools where you live in dorms at the school and only go home at holidays- basically Harry Potter.

And please feel free to butt in whenever Irene.
The Woman 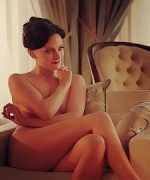 Ah I see, thanks I will

She isn't the cheerleading-captain-popular school girl I think. I think she is more the tough girl without being rude and blunt. She is definitely girly, but is confident in herself.
I figured out that Sherlock would have Baritsu or an other martial arts- sport class (because its canon) and that Irene would be attending too (as being the only girl). She is kind of good in self-defence. They could meet for the first time when Sherlock is alone in the changing rooms and she comes up there after taking a shower. Could that be a 'decent' way of their first meeting?

Of course girls and boys are not allowed at the same time in the changing rooms... Let's say that there is just one changing room, because in the past only boys attended martial-arts class. I think Irene has to wait until the boys are done before she can change or something.. we'll think of something later on

How does this all sound to you?
S. Holmes

Sounds brilliant. I kind of mentioned her a bit but it doesn't really matter as I guess Sherlock keeps tabs on everyone, even people he hasn't properly met before. They could maybe be put together as partners for like kicks and stuff (i know nothing about martial arts haha). But yeah, he can have the class the next day if you'd like, before going to the museum (and then maybe irene could come too...)
The Woman

Thanks! and yeah, I saw. It's a pity I didn't post earlier (parents wanted to do something together).

Of course John should bust into the changing room, supposing that Sherlock is the only one there, while Irene stands there, dripping and naked in front of Sherlock... xD I can totally picture it. Poor young John

I am exited!
S. Holmes

(I shall wait then, until you reached the next day's lesson)
S. Holmes

i've written you in now so you better make an appearance haha
and sorry john your a bit left out of this Baritsu lark :/
His-Doctor

Baritsu isn't really my area. Gun club is. Have you decided what the valuable stolen item is or do you want me to dig one up XD
Hamish Watson-Holmes

Haha no dig one up

I thought John could do the research so then you could have a little bit more control over the case, because otherwise I'll just be making up his deductions.
His-Doctor

Good luck with that then ;)Don't worry it can be completely made up and ridiculous, I won't know the difference!
His-Doctor

Shhh don't give the game away. Sounds good

Oh, I am sorry that I did not write earlier! Mum and dad wanted to do something together ^^
I've posted by the way

Don't worry! And cool I'll go check it out...
His-Doctor

S. Holmes wrote:Shhh don't give the game away. Sounds good

S'ok am just going to delete it now.
Hamish Watson-Holmes

Hey, as you've probably gathered I was away for a week so sorry for the long wait. And nice new pic John haha
His-Doctor

Hey you, yeah you said you were off for a whole week without t'internet, I'd have died without it for a week, bad eh. Yup new pic, ta.
Hamish Watson-Holmes

Hey, Sherlock and John are just having a nosy at the crime scene but could get kicked out or something in a bit/ get caught. Then Irene could turn up and reveal that she had managed to find out a few things that Sherlock couldn't? Just an idea

Enjoy your festival!
The Woman