I think I have overdosed. SH 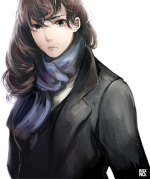 I think I have overdosed. SH

You're now chatting with a random stranger. Say hi!
You both like johnlock.

You: John. I need your help. SH

Stranger: With what? JW

You: Call Mycroft. I think I have overdosed. SH

Stranger: Sherlock! Where are you? JW

You: London alley. Can't remember where. Call Mycroft. The convulsions will start any second now. SH

You: Mycroft sucked in a sharp breath. This couldn't be happening, not again.
'Don't panic John, I'll find him. Meet us at St. Barts, We'll be there shortly.'

Stranger: John nodded and hung up the phone. He got a cab to Bart's and paced in the main waiting room to hear from Sherlock or Mycroft.

You: After what seemed like an age, a gurney was wheeled in, a convulsing Sherlock strapped to it. Mycroft hurried after, his usually unflappable demeanor shaken, his pale face paler than usual, umbrella forgotten. They rushed Sherlock through a door that Mycroft couldn't follow, and he was left behind, staring at where his brother had disappeared.

Stranger: John ran over to them and watched them wheel Sherlock in. He looked to Mycroft and knew it was bad by the look on his face. "Is he going to be alright?"

You: Mycroft's face was drawn, and he looked suddenly exhausted.
'It was cocaine. Did you know he was using again?'

Stranger: John shook his head no. "I mean, he seemed withdrawn but I thought it was one of his moods," he answered.

You: Mycroft shook his head.
'There were track marks down his left arm. He's been using, and for quite some time now. And we both missed it.'

Stranger: John sighed and looked down. "So what now?"

You: 'We wait. He'll be fine. Sherlock and I, we've been down this road many times before. But most were intentional. This one wasn't.' Mycroft's shoulder slumped at the memory. The first time he'd tried to kill himself and Mycroft had saved him he'd been spitting mad. Screamed that Mycroft couldn't even allow him to die in peace. He'd had to be sedated.The second time, when Sherlock was more resigned. He'd simply drew inwards. Didn't talk for almost a month. Wouldn't look Mycroft in the eye. But this wasn't intentional. Sherlock had simply overestimated his tolerance.

Stranger: John watched Mycroft's shoulders slump and closed his eyes. "How could I have been so stupid. I'm a doctor for God's sake!"

You: 'It's a game, John. One he is very skilled at. When he first started using he managed to hide it from the whole family for almost a year.' Mycroft had been the first to find out, coming home early to find Sherlock in his room, needle in hand, and the peak of his high.

Stranger: John wrung his hands together. "Do you think- what about a rehab center?"

You: Mycroft shook his head. 'We've tried. He escapes. As I've said. It's a game. And every single move we make is a losing one. We must simply keep a closer eye on him.'

Stranger: John looked back towards the door. "I swear, I'll beat some sense into him."

You: 'And he'll just retreat. He's been doing this since he was sixteen John. He know's everything that anyone could ever say to him. And it breaks my heart.' Mycroft look vulnerable and miserable as a cheery nurse walked over to them.
'You came in with a Mr. Sherlock Holmes? He's awake now, and you can see him if you like.'

Stranger: John looked to the nurse and back to Mycroft. "It's probably family only. You should go in."
You: Mycroft shook his head.
'He won't want to see me. He'll want to see you. Go.'

Stranger: John nodded and followed the nurse into the room. "Sherlock?" he asked, walking in.
You: 'John.' Sherlock was sitting up, picking at the IV in his hand. 'Hate these things.'

Stranger: "Right, you like to chose which drug you use," he said, already angry just looking at him.
You: 'John,' Sherlock sighed, 'it is no big deal. I simply overestimated my tolerance, that's all.' She shrugged, then looked at John quizzically. 'But you're angry. Why?'

Stranger: "Overestimated your tolerance to cocaine? You could've died, Sherlock!" he spat. He shook his head and looked to the IV pole.

You: 'But I didn't. So why are you angry?' Sherlock tilted his head to the side. 'And isn't what I put in my body my business?'

Stranger: John snorted, "Angry doesn't begin to cover it. You have such a great mind and you're throwing it away for a few hours of being high."

You: 'I'm not throwing it away. I'm refining it. It helps me focus. The high is just an extra bonus. It helps me filter extraneous data. It helps me think, John, and if I can't think I am nothing.' Sherlock waited to see if John would accept his explanation.

Stranger: John shook his head again. "You're an idiot. A complete idiot. You said that you were done with this stuff."