Can anybody tell me; has there been any discussion anywhere about whether Sherlock's hand is correct after the fall. It appears to be well manicured and the fingers look not quite right, also the palm and the lines look like that of a much older person. The life line for instance. (could be the effect off blood drainage but it looks pretty suspicious. A bit too soon.)

I have spotted other things but I'm probably miles behind everybody else. ((I'm not his housekeeper, dears))

I'm sure Sherlock was nibbling on his nails in the run-up to the fall.

If its that suspicious I should imagine its already been well spotted. Can't stop a girl from trying. [nervous grin]
His-Doctor

Too tired to write anything like a coherent roleplay tonight so I'll go have a look and come back to you on it. He normally has manicured nails that I know.

What other things have you spotted?
Mrs Hudson

What's the explanation of somebody falling frontwards, and at the last minute suddenly at the latter part of the fall hitting the side of the head. The arms were raised and outstretched and then suddenly he was laying on his right arm.

The body appeared to be right angles to the wall/benches. I think the there would be a bleed out of the right ear if that was the side of impact. In such a great impact clear fluid would come from the nose.

Also Para-medics were extremely quick on scene and spent time pushing people away instead of attending patient. Body was moved really quickly and no check was made for broken neck or spinal injury.

Haven't done much research on so sorry if it all sounds a bit dim or stupid.

And of course I know that Sherlock survived so I don't have the emotional restraint that I had when I first viewed it last year.
His-Doctor

I'll play devil's advocate in part. Not to say I disagree at all.

I've no experience to call on for the way the jumper moves arms or legs while falling and what limb would be where on impact but intuition would say an arm would be outstretched and may fold inwards on impact. Nor do I know if death would be instantaneous on impact and he rolled sideways.

Having been violently thrown in an unusual minibus crash, I can say it's instinctive, for me at least, to try not to bang my/your face/head.

This is, however, filmed so inconsistencies can creep in due to continuity errors or a body could be dressed by makeup department to look like it might be expected to look, ie with blood from the nose rather than completely realistically if the fluid should be clear. Would that depend on time elapsed?

As you say the fall is forwards, so the body should land with the feet nearest the building. It doesn't, it lands or is situated sideways on to the building as seen from our two vantage points above and on the ground.

Re fast attendance by doctors and nurses it'd cost extra to film and my opinion it'd be detrimentally slowing the pace of the action and tension for there to be a delay in staff reaching the body. To add drama John has to fight his way through the throng.

The pic screencap below is turned 180 degrees - Sherlock doesn't have a mole on his cheek, the jumper either does have or else it is dirt!

Logistics demands that risky stunts are done by stunt-people not by actors without the training and practice. 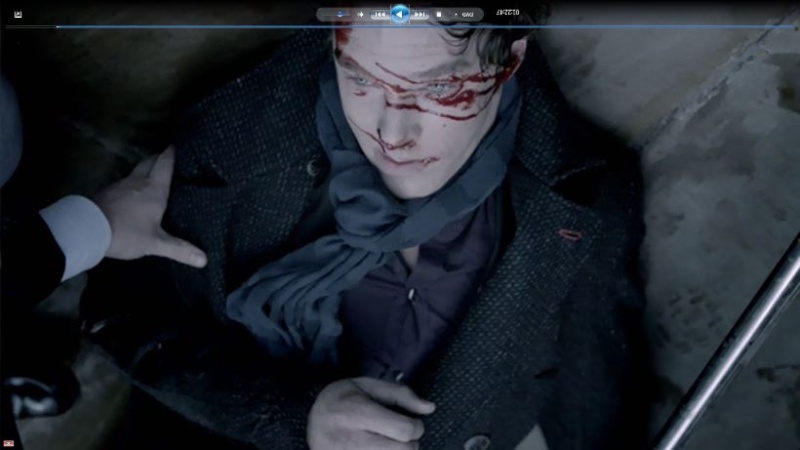