I've seen a lot of spoiler-ish posts floating about tumblr and thought I'd share it with the forum for anyone who's interested.

Really looking forward to the airing of the first episode, though I've heard rumours it will not come out until January. Apparently the reunion between Sherlock & John is meant to be a complete heart stopper. Gatiss and Moffat are excellent writers, so I'll have their word of it. What is that squirrel on your lip, John... 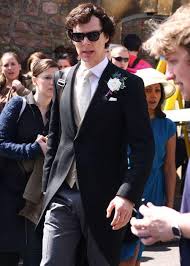 Sherlock and Mary. Not sure how I feel about Amanda playing her but I'm going to leave my opinions until I see her. 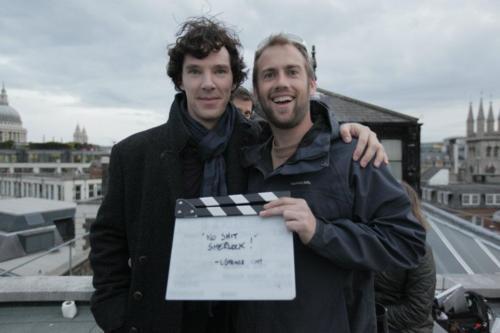 There are many more, but those I've decided to put up.

One more pic, which I died over is this: 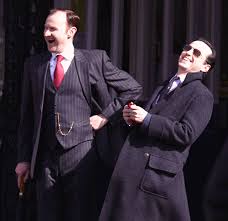 REGARDLESS OF THIS NEW VILLAIN:

This is awesome. I want Jim alive to, but I'm not sure. Though it wouldn't be the first time they try to fool us.
His-Doctor

Hi,
The first pic is a photo manip of two photos, one pic was of John and Derren Brown in that pose. The pic of Sherlock in the busby hat was just Benedict messing about I think.

I was at setlock on 21st Aug and took some crappy pics with my crappy camera. Here is the 'I CAM' car which must be the villain Charles Augustus Magnussen's car and two of the men associated with it.

And a pic of the 3rd man associated with that car.

I can confirm John was wearing a wedding ring.
Consulting Criminal

You're lucky to have been there. I'm raging I couldn't/can't go at all. And yet England is just next door. *sigh*
I guess I'll have to savour the pictures from other people.

But that's awesome. I know some setlock pics will be them messing about but you never know. Could be they did that deliberately with Andrew. Moffat and Gatiss just decided to call him up like, "Okay you're coming onto the set with your Westwood and yeah can you wear Sherlock's coat to freak the fans out great."
I don't know what to believe anymore.
His-Doctor

I used my birthday money to go for the trip. Yeah, me too, I've done alot of savouring other people's pics when they've been filming and I've not been able to go.

I've got a theory that some of the more 'unlikely' setlock pics were RTF fan theories shot for including on dvd as Extra features. I really will laugh and hang up my theorising boots if that was Richard in the coat and he is James' twin though.

Some things are going to be factual but how things appear on screen could be different from the shots before editing. I have a feeling they are using the entrance/exit of a building for a doorway shot and the other side of the same building for a shot from a different angle but they could just as easily use two sides of one building to look like two different places.
Consulting Criminal

In all honesty I would be severely disappointed if they made Richard Jim's twin. I'm more on the canon side of things and do not like the character so I'm hoping they haven't made him a twin. If that were the case, I'd imagine Jim used him to kill himself so that he survives, thinking he had outsmarted Sherlock.

Although I think Andrew might have simply been messing about in the coat. I'd love to see Moriarty alive, or at least some flashbacks of a sort, but overall I'm looking forward to season three in general.
His-Doctor

They've now admitted trolling with faked RTF shots so we can ignore what we've been ignoring anyway. I'd be surprised if they didn't have any Moriarty flashbacks so I hope you get them. We write believable plots so they darn well should be able to keep up the standard. I hope Amanda has a good script to get her teeth into.
Sponsored content