John deepened the kiss right away, his tongue coming back out and searching for Sherlock's taste. It felt as if they'd never done anything else, as if this was meant to be this way. His breathing translated into muffled moans mixed up with their kiss.

His hands roamed over Sherlock's sides, stroking up and down in desperate need of touches and friction. He had snogged endless before, but nothing ever felt better than this. And John doubt anything ever would.
Sherlock Phoenix 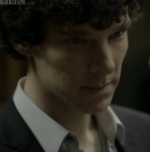 Sherlock was starting to feel faint, it wasn't just the mindblowing kiss, it was John's taste, it was the feeling of his friend's hands on his body, all together arousing him and making his brain short circuit. He wasn't used to his senses being overwhelmed in this way, and he was breathless in no time, pulling away from the other's lips only to be able to ground himself.

He took in shaky breaths, trying to calm down. "John, I... I think I... I am..." his eyes moved down meaningful, a bit embarrassed, he had no idea whether it was normal or not to get this hard just by snogging, but damn, he really couldn't think straight.
John Watson2

As Sherlock pulled away, John took the opportunity to collect himself as well. Doing the same as Sherlock, he focused on his breathing. It seemed like he got snapped back into reality, a good reality, by the loss of contact.

John chuckled a bit as he heard Sherlock's words. If this wasn't Sherlock, he'd of perhaps start teasing the other, nipping down his neck to arouse him even more while teasing about the fact the other had an erection. Or he would take his hand and make him cup his own crotch to show just how aroused he was as well. But this was Sherlock and John had no idea how far he could go. Or more like, how fast he could go. He didn't want to rush Sherlock into things.

"You're aroused?" John smiled, his eyes falling on the bulge in Sherlock's trouser before he moved them to his own. "Don't worry. It's.. Normal.. I.. Feel the same right now." He reassured Sherlock. John licked his lips, God he wanted to move his hand down Sherlock's pants so badly, but he fought off the impulse. "We can take it slow, so you can get.. used.. to it." John suggested, hoping Sherlock would give him insight on how far he wanted to take this.
Sherlock Phoenix

Sherlock nodded embarrassed as a reply to John's question, confused and unsure about his body's reaction. John was quick to reassure him though, and he was surprise to notice he truly had lost track of reality to not notice that his friend was aroused as well.

His eyes moved on him. "You are, indeed... you are..." he repeated, his hand instinctively moving down John's chest, fingers grazing very softly over the bulge in his trousers.
"Why does it make me even more excited to know you are in the same state?" he asked, biting on his lower lip.

"Slow? I don't usually appreciate slow... but... this is a bit overwhelming..." he admitted, blinking.
"What do you suggest?" he asked.
John Watson2

With his eyes back locked on Sherlock's lighter pair, John felt as if he could drown. His lips curled up when those large hands slid down over his chest, expectin them to rest somewhere on his hips. However nothing like that happened and John found himself gasping and moaning redicilousely loud when Sherlock cupped his arousal.

"That's.. Not.. Taking it slow." he whimpered. But who was he to complain? as soon as he felt Shelock's hands on him, he had felt the twitch in his groin as well. So many times had John wondered how it would feel like when those hands roamed over him, and now he finally knew and wasn't going to make it stop that soon. It made him hungry for more.

What was slow to Sherlock, probably was like the speed of light to other people. So when John finished lickin his lips, he replied to Sherlock's question. "how about we do this at your pace. You can explore new areas, touch and feel however you like. I'll help you along the way and I'll be doing the same. You tell me when you don't want me to go on or touch you the way I do. We can just let it happen, see what will come?" He suggested, his own hands stroking down over Sherlock's back and butt before he stroked them back up the same way.

Sherlock looked at John with amazement, his moan making every muscle in his body tense with what he reckoned would be want and desire. The detective had never felt something like this, not quite as strongly, and it was making his head and thoughts feel hazy.

"You mean... you mean to say I can touch you... I can explore you as much as I desire?" he whispered, incredulous, he couldn't believe anyone would give him such a liberty! And the rest of John's words only made him look more surprised.

He could not talk for a second, John's hand on his back and butt making him stretch and coo softly, it felt heavenly, even through the fabric of his thick jacket.
A thought shook him considerably, how would it feel without his clothes? How would it feel on his bare skin?

John could tell Sherlock was a bit overwhelmed by all of it, but he couldn't blame the man. He'd never experienced anything like it and all of a sudden John was throwing it at him all at once. A formed a reassuring smile on his face as he let his eyes meet Sherlock's.

"I meant to say exactly that, yes." He nodded, licking his lips a little without even knowing he did it. His hands stilled on the small of Sherlock's as he listened to every word his flatmate was saying. John lifted up his finger and places it on Sherlock's lips. "Shhh." He soothed him.

Right then he lifted his hand off Sherlock's back and cupped his cheeks, his thump stroking over those sharply formed cheekbones. "I want to touch you because you're beautiful." John began, his voice sweet and soft. "Because I have been wondering what you'd feel like, I've been dreaming about my lips on your skin." He continued. " I want to because I love you." And with that he gently brought their lips together to seal his words.
Sherlock Phoenix

Sherlock was surprised by the feeling that seemed to bloom in his chest at John's words, it was like a warm light expanding quickly over his whole body, it felt like nothing he had ever experienced before and for a moment he was scared of it.
What was John doing to him?
Why was he smiling like that?
Was this... was this... happiness?

Sherlock pulled away from the kiss, his eyes were blue now, filled with apprehension and desire.
"John... I.. I have never... you... you say things that logically make no sense," he commented and chuckled a bit, knowing feelings were supposed to be like that. "But I really want us to go up to my room and I want to take you up on that offer... I want to see... I want to be closer to you than I've ever been to anyone else... I am curious about you... I have never felt it like this for anyone else before..."

(I realize Sherlock fails at being romantic...)
John Watson2

(of course he does.

John's eyes fell down and he couldn't help but laugh out loud. Such a typical thing for Sherlock, this was. He could have known the man wasn't good at expressing these things, he probably barely understood what was going on. And John knows just how much Sherlock detest not understanding things.

With the same smile on his face he looked up at his flatmate again. "I want the same thing, Sherlock." John confessed. "I know to you things might now make sense, but you have to trust me on this one. You have to trust on your feelings, your heart instead of your mind." And that was the best explanation he could give at the moment.

"Come on then, your bedroom it is." John placed a playfully, teasing kiss on Sherlock's lips before he disappeared into the man's room.
Sponsored content