Hi, I'm obviously new here. My name is Raye and I didn't really know where to find a Sherlock RP group so I started here. I can pretty much role play anyone, but sometimes it'll take a bit for me to get into character. I can do a great John, Moriarty or Sherlock though! I'll see you around then. I'll probably make another Skype for this too. I'll post it soon
Sherlock. 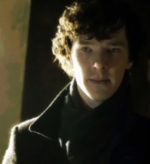 Hi there, Raye,
Welcome to the boards. A lot of us play two or more characters as well. Some members Skype. What sort of plots are you interested in?
JMoriarty1895

To be honest, I don't really know yet. Haha. I do know that sometimes smut can make me a bit uncomfortable. I dig dark, gritty plots that can be kind of intricate. I also really love Kidlock. I'll probably end up doing my fair share of slash too. For the most part I'm up for anything though.
Night Baron

What kind of 'dark, gritty and intricate plots'? Some example please.

I'm pretty new to role-playing Sherlock with anyone but my friends. Um, if I were to come up with one right now it would probably have something to do with psychological and instinctual elements instead of actual consciousness. So, emotional manipulation is really interesting to me. If I had to pick on a fic to kind of show what piques my interest it would have to be Broken Toy by Gwenweybourne on AO3. There is a bit of general OOC-ness with their Jim, but the aspects that intrigue me are definitely there. Like I said before, sometimes smut makes me uncomfortable but I don't really know where my happy median is between okay and awkward.
Night Baron

Message TheWoman1987, that kind of thing sound exactly on her alley.

Thank you. I will.
adlocked

Hi, I sent you a PM. I play a Sherlock and am looking for a Jim.

Do you skype or AIM? Would love to discuss plots.
Sponsored content